I meet Chloé in high School over a decade ago, she always was a free spirit with an attraction for art that she studied in one of the best school in Brussels ” Saint Luc” . For over a year now, she is running a very successful Facebook page dedicated to the street art of Brussels, sharing pictures and information related to that discipline, and above all introducing our dear Brussels through art. It’s not a secret that from time to time I’m missing  ” Mon plat pays”  , so its a great way to stay connected with its urban arty vibes.

Welcome to Brussels, capital of Europe but also, as not so many people may know, the city where the great Audrey Hepburn was born on May 4th 1929.

To celebrate that anniversary the group W49, that is running a street art project for  few months, has decided to call Fkdl , a french street artist, who already has the glamorous type in his creations that would fit to the homage they wanted to give to the actress.
They have been working with many street artists before, as their plan is to change the wall every 2 or 3 months, and it was a perfect time , two weeks ago, to pay tribute to Audrey as she made her big entry to the world on  that same street.
“Breakfast at Ixelles” is of course a reference to the famous movie “Breakfast at Tiffany’s”. We can also admire there a portrait of Liz Taylor, another legendary iconic women of that time.
French artist Fkdl was born in Paris in 1963. He studied in a Design & Fashion art school in Paris before experiencing the art of painting with acrylic.
He also invented a new technic based on collage that he named “The  art Scotch”, which he developed in his work before using it in his street art conceptions in 2006.
He likes to use old papers that he tears apart and scotch together, old magazines and newspapers to whom he gives another life while transforming them in an energetic and old-fashioned styled piece of art.
Most of his street art work is visible in Paris. 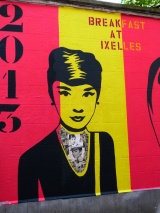 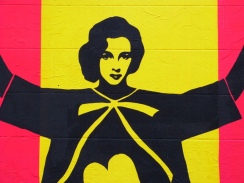 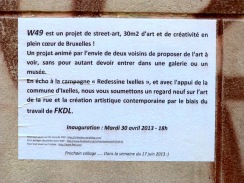